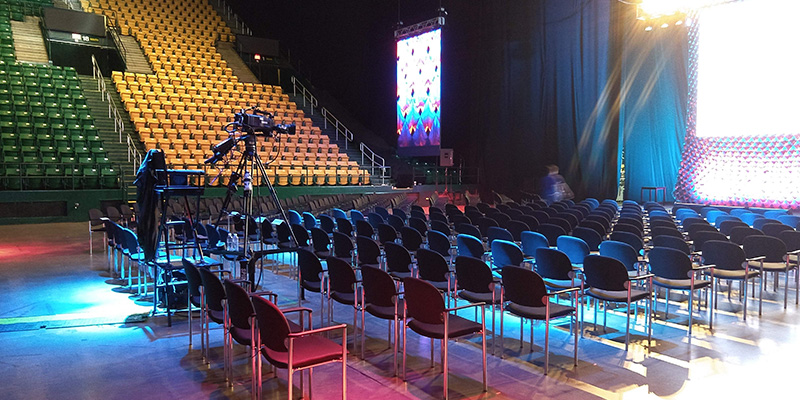 Throughout the months of June and July, we traveled around the country to provide AV production and equipment for a customer’s annual strategy meetings. We went to five different cities including New Orleans, Wilmington, Dallas, Fairfax, and two local shows in Richmond. The events ran weekly in different states, which required a lot of coordination between us, our client, and the venues. Also, being some of the largest shows we do, they require lots of logistical planning to make sure we have everything we will need at the respective venue for each event.

The changing venues and the distance between them meant we had to overcome unique challenges for each job of the tour. Specifically, we had to make sure that all equipment required for each event was loaded on the tractor-trailers leaving our warehouse in Midlothian, VA. The trucks were loaded on the road a week prior to the first stop. We had to factor in unique venue-based differences and account for this in the equipment load. We also had to plan for potential changes to the events as well as back up equipment. Once on the road, it is very difficult to add equipment to the load.

The video portion of the tour had a high level of complexity and also required redundancy of mission-critical components. There are eight computers, four HD studio cameras, two to six screens, six different recordings with different requirements on each, and many other items including cable and signal routing. All of the equipment needs to be integrated seamlessly to allow for precise cue execution and easy troubleshooting if needed. To accomplish this, we use two Analog Way Ascender 16s, which give us 16 inputs and 8 different outputs. Using the preset feature, this allows us to mix everything together in a simple point-click interface. We also use dedicated signal routers for each Ascender to allow routing of the multiple unique sources to any of the screens and confidence monitors.

While most of the shows include at least two projection screens, there was one stop on the tour that had a total of six screens. The venue was a large arena for an audience of over 500. The layout of the arena posed a challenge as the audience was seated on the floor as well as the arena stands. More screens were required in order for each attendee to have a clear viewing angle to the information displayed on the screens. The screens included the main center LED screen for video and slide content and two smaller LED screens on the sides of the stage for live image magnification of the presenter. We opted for LED screens as we did not have the space required for projection. Projectors require a larger area to allow for the throw distance, but LED requires much less space and no throw distance. In addition to the LED screens, we hung three projector screens from the rafters for the audience in the upper decks.

For the audio, we used two lapel mics (one main and one backup) for the main presenter and handheld mics for the Q&A portions of the show. In a few of the venues, our audio operator could not see the handheld mic runners during the Q&A, so he had to rely on our wired/wireless ClearCom system for communication with the production manager to receive mic cues. Each venue requires different speaker setups from small line arrays to larger multiple line array systems. For example, in Fairfax, the large arena required a larger sound system than the other venues. We used two ten speaker WL10 line array systems, two three speaker WL8 line array systems, two JBL 2000w speakers, four front fill speakers, and four subwoofers. Because of the layout of the room, it was a big challenge to get consistent audio levels and clear sound to each audience member, without creating a muddled reverberant sound. To accomplish this, one of our audio technicians used his SMART training and software to make the stadium audio clear and consistent.

Lighting for each show included 20 plus spotlights. In order to create a great look on camera, we had to use front lighting and backlighting on the presenter. This creates an evenly lit presenter, while also providing depth from the backlighting on the shoulders. Without backlighting, the presenter would look flat on camera. In each venue, we hung these lights on heavy-duty trussing with chain motors rigged in the ceiling. To give the events a “wow” factor, we also used colored LED up lights, which were pointed at our black drapery. This created a great look on camera, with a nice blue aesthetic.

In a few of the venues, we also provided executive chairs to our client. The chairs create a professional meeting look and added comfort for their audience members. We stock over two thousand executive leather chairs for this reason. Our client prefers using us for the furniture because it allows them to deal with one company, giving them peace of mind. They know they will not have to coordinate the logistics of furniture delivery and set up with AV delivery and set up. We handle all of that for them.

In addition to the video, audio, lighting and furniture needs, these shows also require the coordination of power needs, shipping logistics, travel arrangements, and much more. These shows are very technical and challenging, but our experience makes it easy for our customer to focus their attention on the presentations and the attendees. We look forward to our next tour!